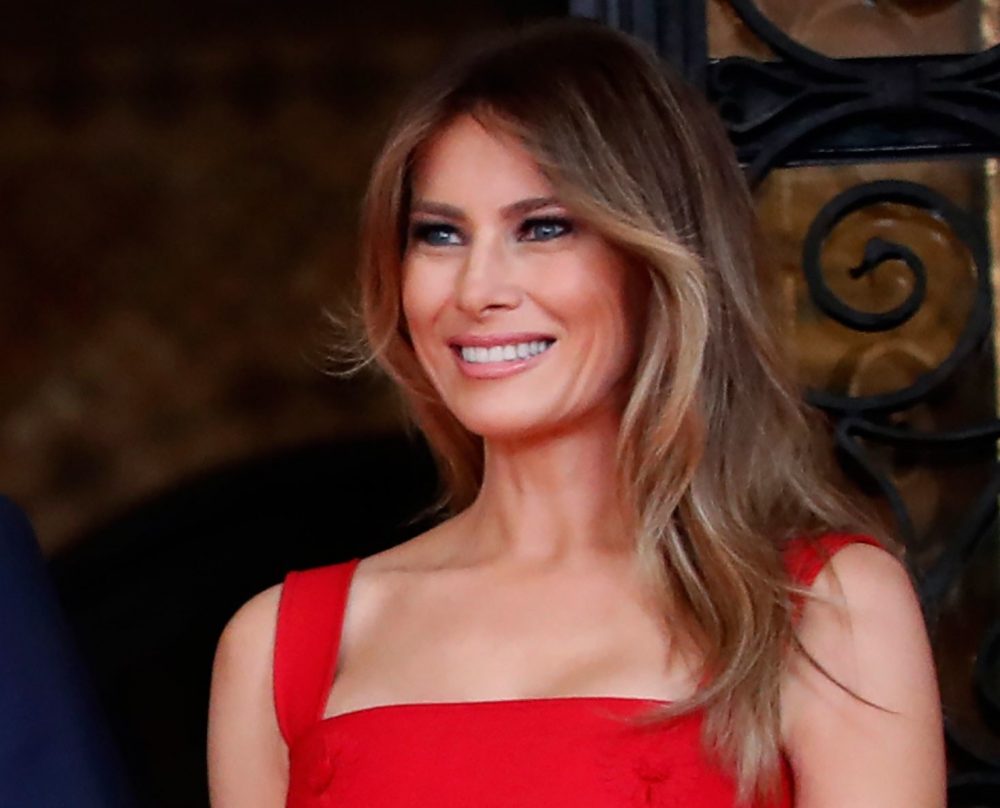 Get to know our First Lady of the United States, Melania Trump.  Regardless of what is reported of her, we wanted to give you an opportunity to learn more about here.  So here are 18 things you didn’t know about First Lady Melania Trump.

Melania Trump was born Melania Knavs on April 26, 1970, in Novo Mesto in Southeastern Slovenia.  Though she is now known for her fashion prowess, few know that this obsession started young.  Melania’s mother who was born in the small village of Raka, was a pattern maker for a children’s clothing manufacturer called Jutranja in Sevinca.  Her mother’s work with clothing as well as Melania’s interest in modeling help forge her into the fashioista we know her as today.

Melania attended college in Slovenia where she studied design and architecture at the University of Ljubljana.  Her frequent moving around has also resulted in Melania reportedly speaking six languages, including English, French, Italian, German, Serbo-Croatian and Slovene the last of which is her native tongue.  Interestingly enough, her status as an American Citizen born in Slovenia makes her the first First Lady to have been born in a Communist country – an ideology which classically has opposed Western politics.

Melania apparently started her modeling career at just 5 years old, but started becoming serious about it when she first appeared in commercials at the age of 16.  When she turned 18, she signed with an Italian modeling agency in Milan.  In 1992 she was named as the runner-up in Jana Magazine’s “Look of the Year” contest, which netted her a potential international modeling contract.  She would go on to be featured as a model in the 2000 edition of Sports Illustrated’s famed Swimsuit Edition, as well as to be associated with the modeling agencies Irene Marie Management Group and Trump Model Management.

It has recently come to light that Melania’s father, Victor Knavs, may have fathered another son before his relationship with Melania’s mother began.  Apparently a court battle ended in Knavs being required to pay child support for a Denis Cigelnjak, despire Knavs originally denying being the boy’s father.  Cigelnjak, who is now 50 years old, still lives in Slovenia and Melania has said that she’s never met her alleged half brother.  No word has surfaced from Cigelnjak to either confirm or deny the allegations that he is in fact the long lost brother of Melania Trump.

Melania relocated to New York City to further her modeling career, and was contracted almost immediately with the help of Italian businessman Paolo Zampolli.  Although she entered the United Stats legally under a work visa, it has been rumored that during this time Melania was paid more than $20,000 for 10 modeling jobs before she had legal permission to work in the United States.  This has been denied however, with people representing Melnia expounding that these claims are unsubstantiated and contradict the legal record.  Since there have been no conclusive documents proving the claims in this regard, clearly this was merely an attempt to contrast her husbannd’s stance on illegal immigration.

Melania first met Donald Trump in September 1998 while attending a Fashion Week party in New York City.  Although it is widely speculated that Trump was still married to Marla Maples at the time the two had been separated since 1997 and their divorce actually became final in June of 1998, months before Trump originally met Melania.  Their romance was swift, but they didn’t officially become engaged until 2004.  Their marriage took place on January 22, 2005 in Palm Beach, Florida.  It’s worth nothing that Former President Bill Clinton and Hillary Clinton, who was a Senator at the time, both attended the Trump wedding.

During their courtship, Melania helped Donald Trump campaign in his initial bid for the Presidency, which took place in the year 2000.  Trump was campaigning under the Reform Party, a center-right third party which aimed to challenge conventional political ideas.  During this time Melania was asked what kind of First Lady she would be if Donald Trump won, and she responded by saying that she would be a “very traditional (First Lady), like Betty Ford or Jackie Kennedy”, and that she would support her husband.  This was exemplified during the inauguration, which she attended in a blue dress which was immediately compared to outfits the notoriously fashionable Jackie Kennedy wore during her days as the First Lady.

Melania appeared in what has gone on to be one of her most famous – and infamous – modeling jobs.  she starred in a commercial for the insurance company Aflac, alongside the much loved and hated Gilbert Gottfried and his abrasively voiced duck character.  She claimed during an interview that her purpose in the commercial was to “give Aflac some sex appeal”.   Since the 2016 election, the commercial has gone on to be something of viral sensation online, accruing millions of views on YouTube and Facebook.

Her marriage with Donald Trump has resulted in just one child – Barron Trump, born on March 20, 2006.  Although she takes great pride and responsibility in raising Barron – they do not use a maid for their son, despite having plenty of wealth with which to do so – she is far from a clingy mother.  Barron Trump has his own floor in the Manhattan Trump Penthouse.  Melania has said that this stage of a child’s life is crucial to have a parent there for him, and with her husband’s responsibilities, she intends to continue raising Barron.

As is common and expected when dealing with anyone who bears the Trump name, Melania has become something of a business mogul in her own right.  To date, she has launched her own Jewelry collection (in 2010) and her own line of skin care products (2013).  With these businesses and the aide of the Trump name, along with her profitable modeling career, Melania has amassed a personal net worth of more than $11 million to date.  It’s unclear what her involvement in her businesses has become due to conflict of interest as the First Lady of the United States, a position which could be seen as giving her an unfair advantage.

When she isn’t busy with her duties as First Lady, modeling for high fashion, running her own successful businesses, Melania Trump is well known for her charitable nature and desire to help those in need.  She currently supports several charitable organizations, including the Breast Cancer Research Foundation, the Police Athletic League, and the American Red Cross, among others.  In 2008, Melania was asked to participate in in the Fifth Annual Love Our Children Day and the beginning of National Child Abuse Prevention Month by ringing the closing bell at NASDAQ.

In addition to an interest in clothing and jewelry design, Melania is also a talented interior decorator.  She is responsible for many of the luxurious and even opulent furniture, art, and color schemes of the various properties she owns with Donald Trump.  In fact, the famous three-story penthouse the Trumps lived in prior to moving to the White House was decorated by Melania in conjunction with the aide of Angelo Donghia.  It’s well known for being completely decked out in 24 karat gold.

Hillary Clinton and Melania Trump share more in common than just being on opposing sides in the 2016 election and now the title of First Lady of the United States.  They are apparently both the First Ladies who have ranked the lowest in terms of public opinion.  Melania Trump so far has an opinion rating of 28 percent, where Hillary Clinton had an approval rating of just 32 percent.  It’s very early to tell how her rating will go, however, so for now we’ll just have to wait and see how she performs in the position of First Lady.  It’s also speculated that much of the public’s unfavorable opinion of Melania is merely backlash to her husband’s own contrasting and polarizing opinion ratings.

As is common in today’s internet-driven society, Melania Trump became the subject of a viral online meme shortly after the Inauguration Ceremony for her husband Donald Trump as the 45th President of the United States.  During the ceremony, Melania was seen with a blank, expressionless look on her face.  When Donald turned toward her, Melania’s face lit up in a beaming smile, only to quickly fade back to expressionless after he turned back around.

The clip was quickly “memeified”, appearing everywhere with captions along the lines of “When you meet your boss in the elevator.”

Melania’s modeling career has even spanned some nude photo shoots.  This puts her in a unique position as being the first First Lady in United States History with officially published, paid nude photos available to the public.

Despite many of her husband’s opponents claiming that he stands against freedom of speech and expression, many of these same people have attacked Melania for having published nude photos, claiming that they are indicative of a poor moral compass.  This may also be due in part to one set of photos featuring Melania posing in a compromising position with another nude woman, but both she and Trump appear not to be concerned.

3.  Taking Down The Trolls

Although Melania is apparently not very highly rated as far as First Ladies go, at least not yet, she has already scored a major victory.  A story originally run on the website Daily Mail, which is a website somewhat notorious for running unflattering stories, alleged that Melania Trump had worked as a “high-end escort” previously in her life.  Melania of course flat out denied the allegation, and responded with a lawsuit against Daily Mail for defamation of character.

The lawsuit claimed $150 million in damages for Melania, and after refiling the lawsuit, the opponents settled out of court with an unspecified “substantial sum” being awarded to Melania.

Many First Ladies pick a singular issue on which to focus while their husband serves as President, and Melania Trump is no exception. She’s made it clear that she intends to go to war against a serious issue in our country:  cyberbullying.  She’s quoted as saying “We need to teach our youth American values: kindness, honesty, respect, compassion, charity, understanding, and cooperation.”  Though she has not made any formal announcements about how she intends to fight this problem, her track record in exuding kindness and helping those in need is sure to help her along the way.

In the meantime, check out her Be Best initiative.

Despite what some people may think, Melania is open about the fact that she doesn’t necessarily agree with everything her husband has said along the campaign trail, nor in his early days as President of the United States.  During an interview she is quoted as saying “I don’t agree with everything he says but, you know, that is normal.

I’m my own person, I tell him what I think.  I’m standing very strong on the ground on my two feet and I’m my own person.  And I think that’s very important in the relationship.”  Despite these statements, she’s come out in favor of some of President Trump’s more divisive stances, including those on immigration.