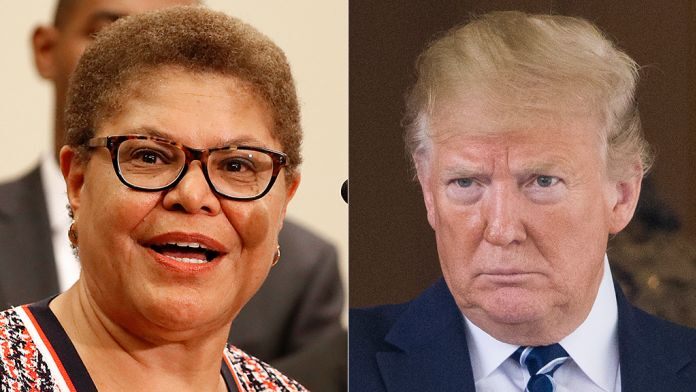 Representative Karen Bass said on Tuesday that she’s willing to impeach President Donald Trump again if he wins the re-election next November.

These Democrats are mental, folks! They’ve filed two articles of impeachment against Trump based on nothing and already dragged the country on a biased and unfair impeachment inquiry process but have no evidence for a crime or misdemeanor.

The majority of the country knows what they’re doing is an abomination of the Constitutional Republic and they know that.

Just so they can impeach Trump again and have the Senate controlled by Democrats remove the president from office; they’re campaigning on getting the Senate back and showing Trump Derangement Syndrome (TDS).

Harvey Levin, founder of TMZ presented Bass during an interview with scenarios where Trump wins re-election but Senate was taken over from Republicans by Democrats.

“There’s no such thing, really, as double jeopardy in an impeachment trial because it’s political,” Levin said. “Suppose he gets reelected, and you win back the Senate in a big way.  If you did that, would you be inclined to take a second bite at the apple and reintroduce the exact same impeachment articles and then send it through again a second if you have a Democratic Senate on your side?”

“So, you know, yes, but I don’t think it would be exactly the same and here’s why,” Bass replied, “because even though we are impeaching him now, there’s still a number of court cases, there’s a ton of information that could come forward. For example, we could get his bank records and find out that he’s owned 100 percent by the Russians.”

This woman is delusional, folks!

Bass continued, “You are absolutely right in your scenario, but the only thing I would say slightly different is, it might not be the same articles of impeachment because the odds are we would have a ton more information, and then the odds of that, sadly enough, is that, you know, he probably has other examples of criminal behavior.”

Trump was accused by Bass of trying to cheat in the 2020 election. At the announcement of two articles of impeachment being leveled at the president on Tuesday, Adam Schiff began the argument.

Democrats are now running with a lie that Trump will cheat in 2020 because they tried to cheat Trump out of 2016.

Everything that is wrong with the Democratic party of today is exemplified by Karen Bass.

Listening to garbage like what’s coming from Democrat Karen Bass is insulting to the American people.

All of it was manufactured by the Democrats. To take the focus away from the Obama administration’s attempt to govern a coup against Trump to help Hillary Clinton by spying on his campaign they invented a hoax of Russian collusion.

And now we have to endure something like this? Give me a break.

Trump, at a rally in Pennsylvania Tuesday night, decried their efforts as “impeachment lite.”

The Democrats have no way to beat Trump in the 2020 election.  Their field of candidates come off like the extras in One Flew Over The Cuckoo’s Nest, and they are terrified that the Obama administration will be exposed for their interference in the 2016 election.

They have been in a campaign to overturn the 2016 election since the day Trump won it.  I for one believe in the American people, and I think the Democrats are in for a rude awakening come Election Day 2020, as I believe not only will Trump win the White House again, but the Democrats will lose the House and Senate badly.  And they will have done it all to themselves.